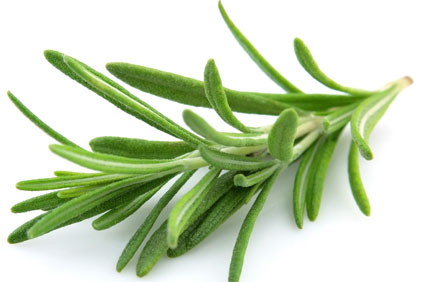 Rosemary will help tone your skin and retain your natural moisture. Used on the face it is
a natural acne treatment, is a rich source of vitamin E, prevents age-related skin damage.
Rosemary has antibacterial and antiseptic properties making it good for acne, eczema,
dermatitis and oily skin. It clears pores and promotes healing improving the appearance of
skin. Rosemary is a natural astringent because it is high in antioxidants which is why it is
beneficial to aging skin. It increases blood circulation to the skin's surface, smooths the
appearance of wrinkles, tones, moisturizes and can help with the treatment of scars and
sun damaged skin. Rosemary verbenone is especially useful for treating chronic skin
conditions, dermatitis, eczema and psoriasis. Rosemary's pronounced stimulating effect
on the circulatory systems (lymph, nerve and blood) makes is especially helpful for
​lowering blood pressure, as well as for promoting cellular respiration and detoxification.

Rosemary tones and firms sagging skin,  and is used as an ingredient in anti-aging
products. The disinfectant and antibiotic properties of rosemary contribute to its use for
treating acne, dermatitis and eczema, according to Guide to Herbal Remedies.
Its main benefits for the purposes of skin care include: Stimulating enhanced circulation,
​which enables small wounds to heal faster; moisturizing dried out skin cells (it is an oil, after all); reducing inflammation, which both makes acne blemishes less noticeable and aids in healing; as well as promoting a more even skin tone, enhancing cellular respiration, and working as a mild antioxidant.
​
A common indication of skin damage and aging skin is broken capillaries, a condition where capillary walls rip and blood seeps to the surface of the skin.  As a result, fine, red lines appear under the surface of the skin, creating an unpleasant look.  Rosemary has been known to reduce the appearance of broken capillaries.  It stimulates circulation, reduces the appearances of the red lines, which makes it an effective element in anti-aging products.  Rosemary is also effective in reducing under-eye puffiness since it is able to increase circulation and help drain toxins that accumulate in the area directly under the eyes.
The aroma is a great addition to any students’ study corner because it stimulates brain activity and makes you feel alive and awake. It is known as the "dew of the sea".